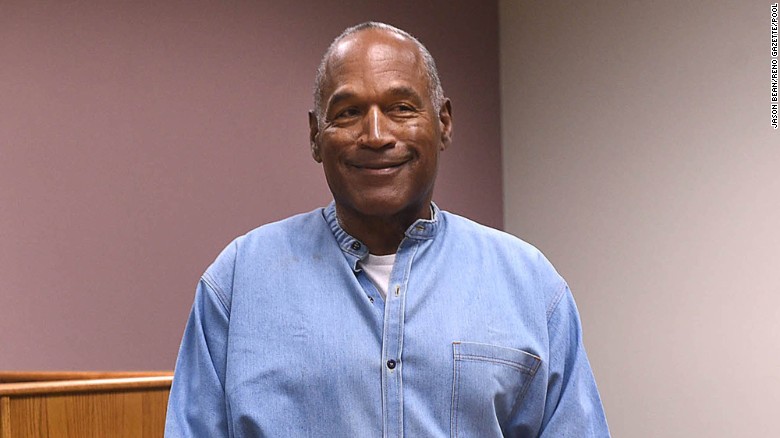 A Nevada parole board has granted O.J. Simpson parole. Simpson was sentenced in 2008 to up to 33 years in prison for kidnapping, armed robbery and assault with a deadly weapon in a 2007 incident that unfolded in a Las Vegas hotel room. He could be released as early as October.

A Nevada parole board is deliberating whether to release O.J. Simpson from prison after the former NFL star apologized, said he was a model prisoner, and promised that he’d have no conflicts if released.

“I’ve done my time,” he said. “I’ve done it as well and as respectfully as I think anyone can.”

Simpson has served nine years of a nine-to-33-year sentence for an armed robbery and kidnapping in Las Vegas in 2007. Now 70, Simpson appeared alert, engaged, and quick to smile, letting out a hearty laugh when Parole Board Chairman Connie Bisbee accidentally said he was aged 90.
“I feel like it,” he said, laughing.

Still, at the parole hearing, he deflected responsibility for that Vegas crime and said he was misled by associates around him, who he said then turned on him in court.

“Unfortunately, they got a get-out-of-jail-free card when they said ‘O.J. told me (to do it),'” Simpson said. “Nothing I can do about that.”
Four members of the parole board are now deliberating. If their vote is not unanimous, two other board members will be asked to vote. Simpson must win a majority of the vote to be released.

Thursday’s parole hearing follows renewed interest in Simpson’s story, which was explored last year in the award-winning documentary “O.J.: Made in America” and the FX true-crime drama “The People v. O.J. Simpson.”

Simpson is best known for his infamous 1995 acquittal in the grisly slayings of his ex-wife Nicole Brown Simpson and her friend Ron Goldman in what was called the “trial of the century.”

Though it’s been 22 years since that not guilty verdict, the murder trial’s themes of criminal justice and race, trust in police, celebrity and domestic violence remain remarkably resonant in modern culture.